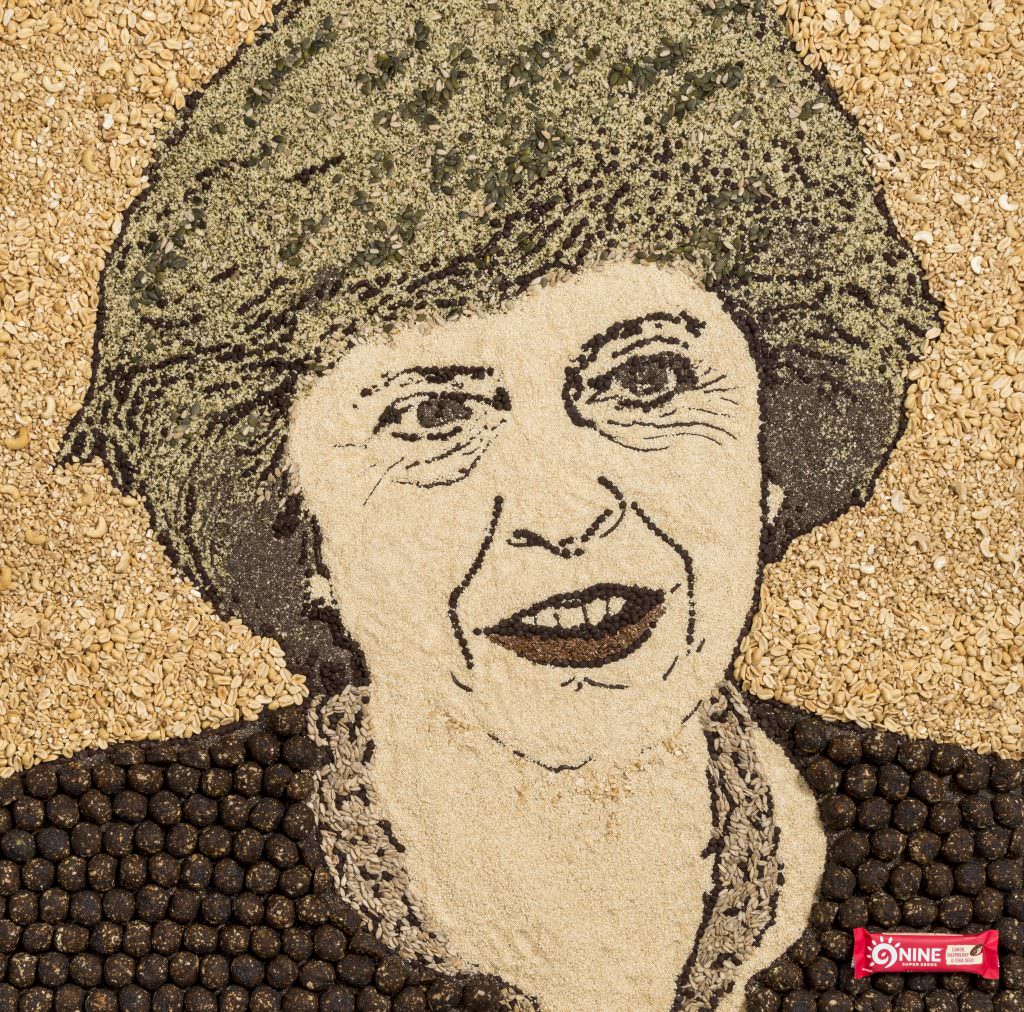 Ahead of this week’s general election on 8 June, renowned food artist, Prudence Staite, has been commissioned by Super Seed brand 9NINE to create three portraits – of the Conservative, Labour and Lib Dem leaders – made purely out of the ingredients found in their healthy snacks. The portraits took 100 hours to complete and are made up of over 1,000,000 Super Seeds ranging from sunflower for Jeremy Corbyn’s beard, hemp for Theresa May’s hair, and linseed and Seed Bombes for Tim Farron’s smile, as well as chia, pumpkin and sesame, and a few cashews, pecans and peanuts thrown in to shake things up a bit. The portraits are sure to bring a new perspective to the familiar faces. ”

Prudence Staite says “It has been super fun to create the most spoken-about people at this time from Super Seeds. The range of colours and textures have been an interesting and versatile palette to work with, and I think I have been able to capture their personalities in an edible political gallery. It’s been really fun to make an edible political statement with ‘seeding’ the leading players in the run for leadership”. 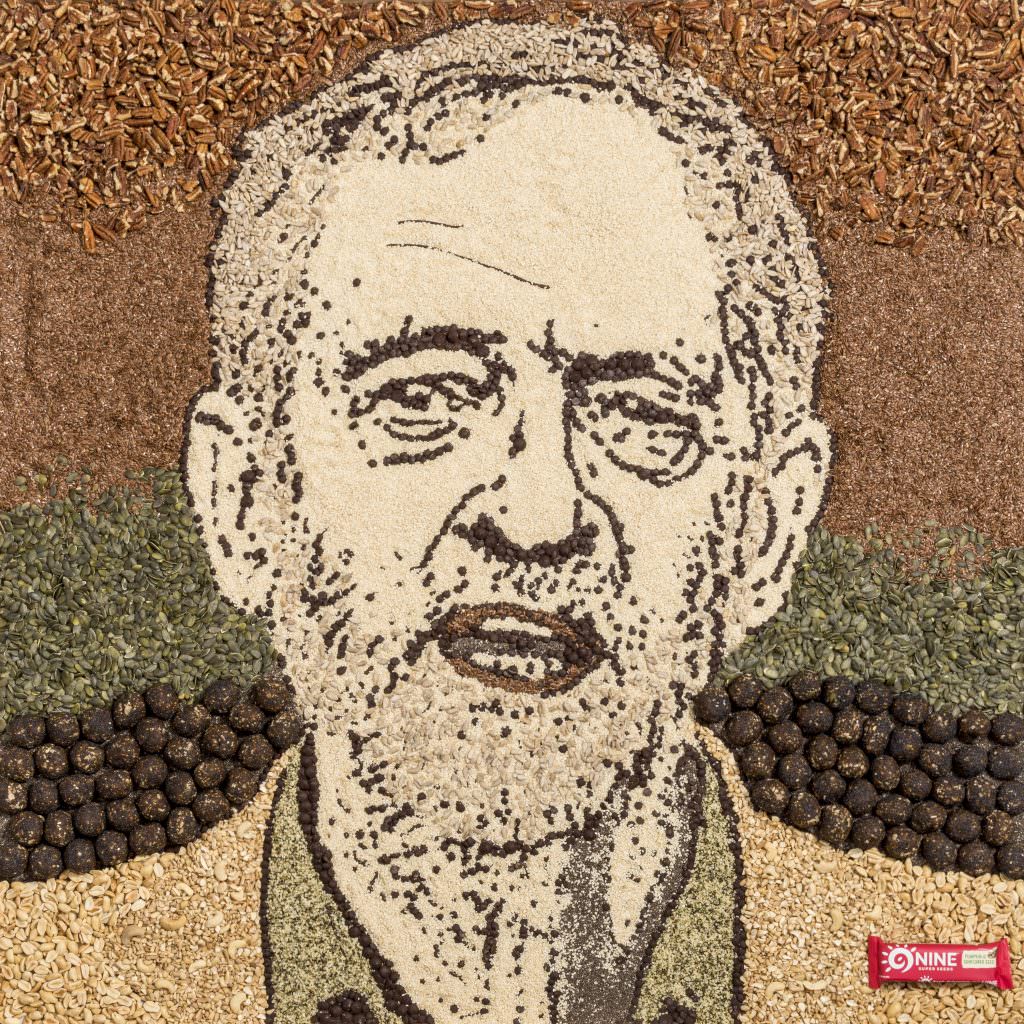 Over 150 Seed Bombes –  little bundles of Super Seeds mixed with double cocoa, launching exclusively in WHSmith in July – were used to create Theresa’s jacket, also Tim’s mouth detail was created with a dozen of them, and Jeremy’s background used 83.

Theresa’s hair has been styled with hemp seeds, with pumpkin and sunflower highlights and chia seed lowlights, her necklace was made with sunflower seeds and carob, and her lips were created with linseed.

Jeremy’s iconic furry beard has been created with sunflower seeds that perfectly match the colour; his jacket is styled from peanuts and cashews, and his shirt collar is made from hemp.

Tim’s infectious smile has been captured with linseed, carob and Seed Bombes, and his hair features pecans and linseed.

It’s not just 9NINE that have realised what a punch these players pack, Super Seeds are very much on trend as their slow-release energy helps with concentration and staying focused, unlike the peak and crash of their high-sugar counterparts.

Super Seeds are very much topping the pops and here are a few reasons why our leaders should embrace their unique qualities:

Chia means ‘strength’ and as far as fuel goes, it doesn’t get much better than this. Chia seeds are full of nutrients and come with very few calories. Chia is a real all-rounder; it is appealing to the masses and for good reason, it’s hard to beat!

Flaxseed is full of good things and is often referred to as wonder food. You have to grind flaxseed before using it so it’s a real labour of love, but if you’re committed, it will pay off as you can add it to anything from morning porridge to homemade bread.

Pumpkin seeds offer vitamins, minerals, antioxidants and essential acids with every handful – they are seriously versatile, there is no holding them back! They can be eaten raw or cooked, added to sweet or savoury, or simply roasted for a super on-the-go snack.

Top of Their Game

Sunflower seeds are crunchy and nutty and considered by many as top of their game – they are even said to bring a glow to tired skin! Filled with goodness that’s drawn straight from the sun, they become the star of the show in recipes such as sunflower seed pesto and homemade bread.

“Working with Prudence we’ve been able to really have some fun with the ingredients we use in our products. Eating healthily is about so much more than simply what we digest, it provokes healthy attitudes and a happy mindset and we wanted to reflect that by having some fun with the product.”

Eating healthily is at the root of many political campaigns – from children’s school lunches and health concerns throughout the NHS, to pensioners and mental health. The seeds have been planted… which ones will reach the necessary heights!

Join in the conversation on Twitter: The portraits are expected to encourage further nationwide debate ahead of the election, with hashtags:

9NINE products are handmade in a craft bakery in the beautiful Vale of Llangollen in North Wales. Their unique blend of Super Seeds are a favourite for people leading healthy lifestyles and they have just unveiled some brand-new packaging, and several exciting new products including:

Seed Bombes which come in packs of three pop-in-your-mouth-on-the-go convenient little bundles of Super Seeds mixed with double cocoa. They aim to drive value into the indulgent treats and confectionery category, and flavours include Coconut, Raspberry and Vanilla.

Since launching over 10 years ago, 9NINE Super Seed bars have rapidly grown to become the most widely distributed mixed seed bar in the UK. The 16-variety strong range is currently stocked at major retailers including Tesco, Waitrose, Sainsbury’s, ASDA, Morrisons, W.H Smith, E.H Booths, McColls and Holland & Barrett, as well as independent retailers nationwide. 9Brand Foods will be rolling out to a number of high street convenience retail chains throughout spring/summer 2017. 9Brand Foods is a subsidiary of Wholebake Ltd. Visit: http://9bar.com